Peter is a delightful teacher… and “energy essence not focused in physical reality” who sometimes referrs to himself as “The Peter.” It was in the fall of 1971 that he first presented himself to Kay and Jan Shinol as their teacher. Kay, called “Lucette” by Peter, began allowing Peter to speak through her in December, 1971, and Jan, referred to as “Harris” by Peter, took on his role as questioner. Even though they had been married for seven years by then, their odyssey together was just beginning…

The first sixteen years… we called our sessions with him “Peter Lessons.” Since we experienced Peter as that ultimate college professor, this seemed fitting. Our challenge in those early years, was to find questions to ask and subjects to explore. Peter was using that time to find the vocabulary he needed to communicate with us in such a way as to always expand our thinking, arouse our curiosity, magnify our unlimited nature, and encourage our continued exploration. Many “students” have joined with us over the years and through their shared adventures, have added a new sense of wonder to the sessions. In 1987, Peter suggested we begin calling the sessions, Dialogs with Peter.

In the beginning, we wanted to test the phenomena. For one such test, he gave us names of some people in Hamburg, Germany – relatives of an incarnation of his – we could question about him. Then, our first study group assisted us in testing biofeedback variations, theta states, and levitation. Something different was happening even though we did not have explanations for it at the time.

“There is a planet beyond Pluto….” he began, in answer to our question about a UFO abduction case. That was in the Spring of 1972. At that time, science was sure that there could not be a planet beyond Pluto! Nonetheless, Peter began to tell us that the visitors who abducted the Mississippi fishermen were from a planet beyond Pluto, with an orbit perpendicular to the Plane of the Ecliptic, with rings like Saturn. It seemed we had found a flaw in Peter’s teaching. Two weeks later, on the front page of the newspaper was a story of two mathematicians at Cal Tech who had “found,” using computers, a planet beyond Pluto with rings like Saturn and an orbit perpendicular to the Plane of the Ecliptic! One thing was apparent. We had a lot to learn about a lot of things.After more than three decades, that statement is still true.

INTRODUCTION TO THE 12 MANY FRIENDS 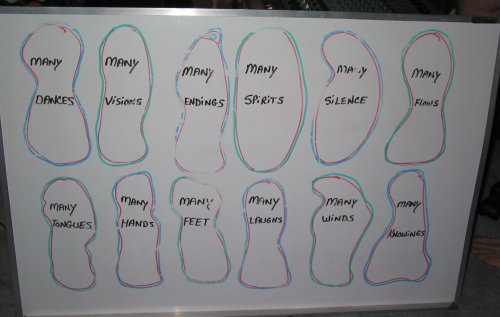 Sign showing the names and positions of the 12 Many Friends

Our classroom grew when the 12 Many Friends appeared and began adding their knowledge and wisdom to our lessons. They appear in 2 rows of six, and ask each time in summoning them that we call them by name:

Bottom Row:
Many Tongues is the power of communication. Many Tongues gives us the gift “to always say who you are, without reservation,”

Many Hands represents the energy of doing and accomplishing. The gift of Many Hands is the “gift of doing the good deeds that say who you are.”

Many Feet represents our connection to Earth. Many Feet gives us “the gift of happy travels, so that your feet, where ever they take you, will always say who you are.”

Many Laughs, pokes fun at us a lot, and if there is lots of joking going on, we can be sure he is very close. Many Laughs represents the energy in joy, in not taking things so seriously all the time. He gives us “the joy of you, the tickle of you. Peace and love are nothing without joy. May your hearts always find the gift of laughter.”

Many Winds is the energy of life and breath. By being attentive to our breathing, we can tune into the song of our body. While SPINNING, think of stirring air and wind. Many Winds gives us “the movement of the wind, the flow of time, the flow of space, that always, always, says who you are. May the wind always carry you in all that you do, in all that you are.”

Top Row:
Many Dances, represents moving energy for connecting with other energies and for connecting with the Self through mind and body. Many Dances’ gift is found “where the heartbeat of the Universe is your heartbeat, where the movement of all things is in the harmony of You. All things move as you move. All hearts beat as your heart beats. Know this in all that you do.”

Many Endings represents the energy of endings, which are also transformative new beginnings. Many Endings said: “For all things, the end and beginning form the circle. And the circle becomes the spiral. And the spiral is never, ever ending. The movement through beginning, ending, circle, cycle, spinning, spiral. This is our gift to you.”